Recently I took note of an interesting detail on the 1817 Plan of Chapel Hill. At the north end of town the map shows the Preparatory School: 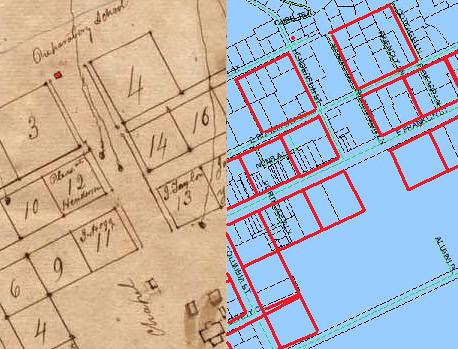 As you can see by comparing the modern tax map (on which I have drawn the original lots in red), the Preparatory School was originally at the site that is now the NE corner of Henderson and Rosemary Streets.

Battle's History relates a lot of detail about the Grammar or Preparatory School. A few highlights follow: "In December, 1795 . . . the Board determined to erect a house for a Grammar School . . . a place peculiarly lonely, but near two never-failing springs of purest water."

Presumably Battle means the two springs shown on the 1817 Plan of Chapel Hill. These are not very discernible today, but must be in the vicinity of the old Post Office and somewhat east of there. These springs are the headwaters of Foxhall Branch, a tributary of Bolin Creek.

Battle continues "When Abner W. Clopton gave up the Grammar School in 1819, the University abandoned it . . left to the bats and owls" and under financial pressure in 1831, the University sold "the Preparatory School Acre . . . after some years in the occupancy of a . . . professional hunter . . . Peyton Clements."

A nearby lot has long been said to have been the site of a Freedmen's School, that is, a school for the education of freed slaves after the Civil War. Joe Herzenberg (who lived a block away) often told me so.

Battle mentions later: "Another portion of Grand Avenue was bought by the Methodists as a site for their church, and, when they concluded to build another, some northern Congregationalists bought it for a school and church for the colored. It has since been sold into private hands." By Grand Avenue, Battle means the broad avenue that was once planned to run between lots 11 & 13 and between lots 12 & 14, so it appears that Battle is describing the corner of Rosemary and Henderson Streets.
Posted by Mark Chilton at 7:25 PM