Check out this great collection of newspaper accounts of the construction of the old Chatham County Court House (which tragically burned two days ago):

Probably most of you know of Orange County Public Schools' Gravelly Hill Middle School on Old NC 10 near Efland. And you may have read that the name was chosen after a historic school that was nearby a century or more ago.

A while back I stumbled across a copy of a deed and survey at the State Archives from Thomas P. Devereux to Thomas Squires, William Shaw, Thomas Thompson, John Nelson, and Samuel N Tate "Commissioners of the Public School Ridge District No [blank] in the County of Orange on the headwaters of Seven Mile Creek adjoining the land of Thomas Squires . . ." Here's the survey: 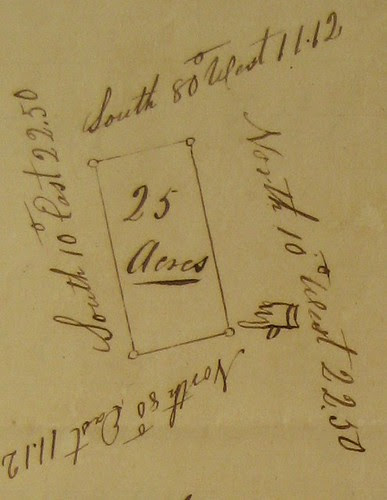 But I wasn't too sure where it was. This other deed and survey to Thomas Squires helped a lot. It was also from Thomas P Devereux and wrapped around the north and east sides of the school lot: 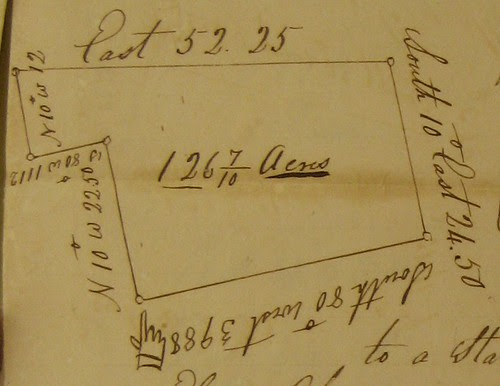 Both Squires and the school committee were acquiring their property from Thomas Devereux, whose brother-in-law Cullen Pollock owned a 5,000 acre tract near Efland and Mebane. The Pollock Tract was subdivided around 1754 into 10 nearly square lots of 500 acres each. During his life Cullen sold off numerous parcels, usually about 1/2 of a 500 acre lot at a time. The rest of the land was leased out. When Cullen died his lands passed to Cullen's sister and her husband Thomas Devereux.

Thomas P Devereux and Frances Pollock Devereux obtained extensive land holdings from Cullen Pollock - in many other counties to the east of here as well as the last of the Pollock Tract between Efland and Mebane. Devereux immediately set out to sell off the last of the Pollock Tract and there were about a half dozen sales around 1840 including the above conveyances to the school and Thomas Squires.

Putting together the whole picture, all these transactions were in Lot 2 of the Pollock Tract which is basically the place we know as Cheeks Crossroads: 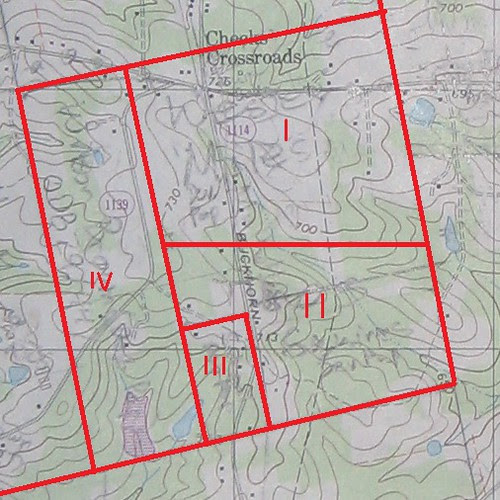 As you can see, that old school lot was on the west side of Buckhorn Road about 2/3 of a mile south of its intersection with Old NC 10. I don't know what's there now, but it would be interesting to go look. I assume that this is the school that was once known as Gravelly Hill School.
Posted by Mark Chilton at 4:20 PM 2 comments: