Long before the Town of Carrboro and even before UNC, there was a road that connected Hillsborough to the town at the limits of navigation on the Cape Fear River – the nearest inland port – then called Cross Creek but now called Fayetteville. That road ran high up in the watershed of New Hope, Bolin and Morgan Creeks, just a mile west of the New Hope Chapel for which Chapel Hill is named. That road is Old NC 86/Old Fayetteville Road/Ray Road/Smith Level Road.

Though the old Fayetteville road is not named on John Daniel’s 1792 survey of the proeprties donated to start UNC, the road is nevertheless plainly shown: 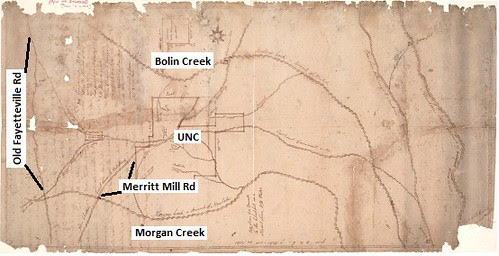 When George W. Tate produced the first detailed map of Orange County in 1891 he showed largely the same road configuration: 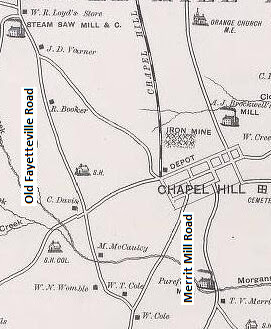 However the McCauley bridge site was abandoned in the 1920’s (probably about the same time the mill was abandoned) in favor of another old bridge location a little further down stream (where the present bridge is). South Greensboro Street was not extended down the hill to that location until the 1950’s sometime, but Old Pittsboro Road in Carrboro wended its way down to meet Merritt Mill Road and cross Morgan Creek. The present bridge location had been long in use and is also shown on the 1792 Daniel plat. Before the University was built an alignment more or less equivalent to Cameron Avenue/Merritt Mill Road/Smith Level Road lead from the old Fayetteville road up to the New Hope Chapel (which formerly stood where the Carolina Inn is today).

Probably since the 19th century, this road has been called Smith Level Road after the Smith family farm which was along it. The Smith house is that stately home on the west side of Smith Level Road, about 2/3 of the way to Chatham County from Carrboro. It was once the home of Sidney Smith a white slave owner whose African American descendants include Pauli Murray. The road is called Smith Level because of the flat topography particularly on the southern half of the road.

In fact the unusually flat topography is the very reason the old Fayetteville road ran that way. Considering the inherent advantages of the route and the fact that Hillsborough was the site of a Native American village from pre-Columbian times, it is conceivable that the route from Hillsborough down Old NC 86/Old Fayetteville Road/Ray Road/Smith Level Road may well have been a Native American trade route from long ago.
Posted by Mark Chilton at 1:56 PM 2 comments: