I recently came across this map of the Chapel Hill Iron Mine in an 1892 publication on mining in North Carolina. The Chapel Hill Iron Mine was operated by Gen. Robert F. Hoke, supposedly from about 1872-1882 and was a critical factor in how and where the rail line into Carrboro was built. Alternate connections to Durham, Hillsborough or Apex were considered, but connecting to University Station was the cheapest route and involved passing by Gen. Hoke's mine, so he put forward significant resources to make it come that way. 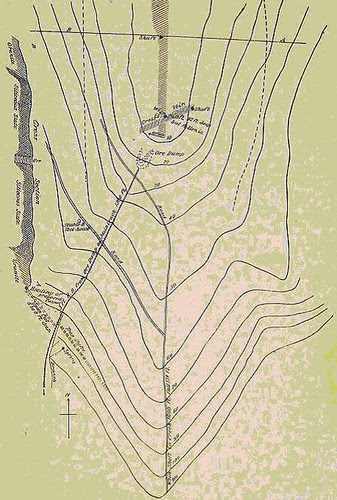 The map gives an interesting view into the workings of the mine. It shows the two main shafts (one of them already collapsed in 1892), which are now in the center of the Ironwoods neighborhood in Chapel Hill. I have previously found references (Orange County Observer, 10/23/1881) to a spur connecting from the rail line to the mine, but this map is the first time I have seen any indication of where it was. Apparently it went down the gully between Cardiff Place and Birchcrest Place. The 3’ gauge railroad must have wound back to the NW in order to connect with the main rail line without crossing Bolin Creek, so I suppose it must have followed a route like this: 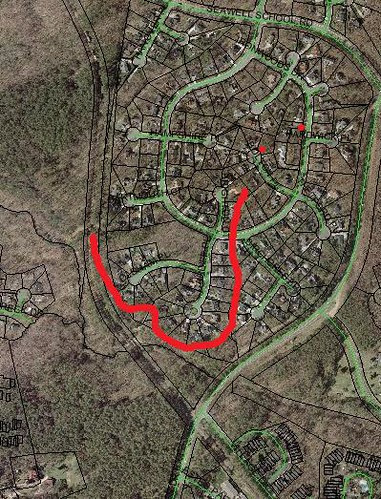 The two red dots are supposed to be the locations of the shafts. I wonder if any remaining evidence of this narrow gauge railway can still be seen out there today?

UPDATE: Sure enough, we hiked up along the tracks just north of Bolin Creek and immediately found the abandoned grade. It looks like a good amount of work was involved in building up the grade for the spur and at least one small trestle must have been used. The spot where my gradual swooping curve takes a northward indentation was drawn to follow the contours on the topo map, but actually a trestle bridged that cove. In a couple of places, the OWASA sewer lines tore up the former railroad grade, but the grade is mostly intact and quite discernible.

Here's a picture of the historical marker at the top: 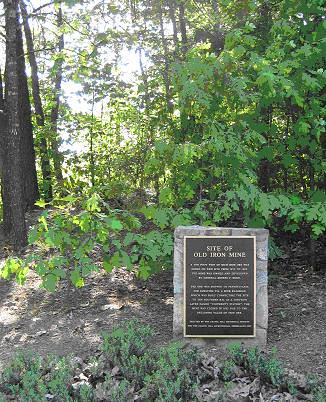 Trespassers in the Alston Quarter

Here's a little bit of further interpretation on this map: 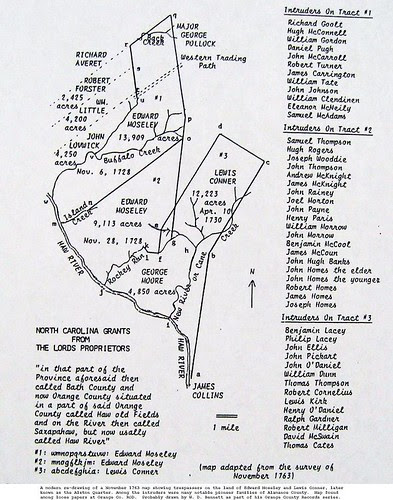 First, this map is redrafted from an earlier survey or surveys. It's not clear who made this, but I suggested it might be W. D. Bennet. David Southern says it might by Miles Philbeck. Either way, I do not know what document it is drawn from - it would be interesting to find that.

Of these men, Moseley, Little and Lovwick were part of the surveying party that established the dividing line between North Carolina and Virginia in 1729. Many of those in the party were granted choice pieces of land in exchange for their service (it was a dangerous mission into the wilderness at the time). Moseley and Lovwick apparently chose parts of the highly desirable Haw Old Fields - lands traditionally settled by Native Americans, but more or less abandoned due to declining populations, disease, colonial pressure etc. Copies of Lovwick's grant and one of Moseley's are at the SHC at UNC and show taht they were granted by Lord John Carteret (later Lord Granville) in Nov. 1728 and reconveyed to George Burrington in 1730.

Richard Everard was the last Governor under the Lords Proprietor of North Carolina serving from 1725-1731. He is credited with initiating the NC-VA border survey (and little else). Everard evidently got a choice piece of the Haw Fields as well. His land passed to his grandson George Lathbury or Lashbury or Lashberry. Lathbury's 1o,000 acres passed to Edund Fanning, Abner Nash and Thomas Hart in 1770 for 670 Pounds, but only Nash's third was spared from confiscation following the Revolution (p. 45 2nd Report of the Ontario Archives, Alexander Fraser, 1904; State Records of NC, Vol 24, pg 285). Likely Sheriff John Butler wound up owning a part of the Everard tract. See Orange DB 3, pg 462.

This leaves the question of who Lewis Conner, Robert Forster and George Moore were. I am not sure who they were, but they were clearly all important folks in North Carolina around 1730.

George Moore (or Roger?) received this tract on 12 Nov. 1728. This land was later known as the Alston Quarter or Austin Quarter and over 1,000 acres of it is still in single ownership as a single lot. Moore's land apparently passed to a member of the Ashe family (a lawyer who was involved in the litigation over Strudwick's 30,000 acres - see below). The Ashe family included Gov. Samuel Ashe among many other notables. His grave is supposed to be there on the Alston Quarter (per Stockard's History of Alamance).

All of the tracts between Everhard's and Moore's, totalling almost 30,000 acres were somehow coveyed to Gov. George Burrington. This constituted all of the area that is now Hawfields, Saxapahaw and Swepsonville. Burrington tried to sell the Hawfields tracts several times including through an ad that ran in the Virginia Gazette 2/10/1738, a transcript of which is here:
http://www.ncpublications.com/colonial/Newspapers/subjects/Agri.htm#1736

Here are his descriptions of the five tracts [with my interpretations]:

1. The Tract of Land which was Mr. Robert Forrester’s, containing 2425 Acres. The first Tract lies between Sir Richard’s Land, and Marrowbone River.
[This is between the Everard-Lashbury tract and Back Creek - i.e. the area just upstream of Back Creek. Note that in one of the Land Grants in the SHC at UNC, it refers to neighboring property owner Robert Porter.]

2. The Tract of Land which was Mr. William Little’s, containing 4200 Acres. The second Tract lies between Marrow bone River, and Flat Branch; and has in it on the River, Saxapahaw, Low ground Run, and Indian Banch; and on Marrow-bone River, one Run or Branch. Flat Branch is opposite to the Entry of Arrunky River.
[Flat Branch is probably one of the creeks that flows into the Haw in Swepsonville, perhaps the one that flows almost immediately through the Virginia Mills site. Arrunky is clearly a mis-spelling of Aramanchey or Alamance. No real idea where Lowground Run or Indian Branch are, but he appears to mean that they are tributaries of the Haw directly. One Run – Lone Run? – is a tributary of Back Creek, but it is not clear which one, perhaps Mill Creek. Little's Tract includes the upper part of Swepsonville including the millsite.]

3. The Tract of Land which was Mr. John Lovick’s, containing 4200 Acres. The third Tract lies between Flat Branch and Buffelo Creek; and in it, on the said Saxapahaw River, is Dry Branch, and the Westward Indian Trading Path.
[The trading path apparently passed right through here and this would be consistent with maps which show the trading path crossing the Haw immediately upstream of Big Alamance Creek. Lovwick's Tract includes the lower part of the Town of Swepsonville and the Puryear Mill site.]

4. The Tract of Land which was Mr. Edward Moseley’s, containing 10000 Acres. The fourth Tract lies between Buffelo Creek, and Island Creek: At the South East Corner of the third Tract turns with an Elbow North, and passing by the East Ends of the first Three Tracts, terminates on the East Line of Sir Richard Everard’s; and is bounded on the East, with the afore mentioned Lands of Mr. Jones, and Major [James?] Pollock. In this Tract, are Jumping Run, Fish pond Branch, and the Pond; all on Saxapahaw River.
[Jumping Run is probably merely the east branch of Haw Creek, misinterpreted for a time as being a direct tributary of the Haw; no idea what the Fishpond Branch or the Pond were.]

5. The Tract of Land which was Mr. Edward Moseley’s, containing 8400 Acres. The fifth Tract lies between Island Creek [Meadow Creek], and Rocky Run, in a Sort of Triangle; and in it are Briery Creek [Motes Creek?], and Brick house Branch [Hobby Branch?].
[This is essentially the area just NW of the Alston Quarter and includes Saxapahaw and the Cedar Cliffs Mill.]

All of this land was sold by Gov. George Burrington to Samuel Strudwick per a deed recorded in the New Hanover County in 1754. When Strudwick came to America a decade later he discovered taht all sorts of folks had moved onto his land and commenced litigation (the map above apparently was a part of the litigation). It seems that the matter was not entirely resolved in Strudwick's favor. Some of the 'intruders' were there under color of title obtained from Granville's agents, who presumably did not really have a legitimate claim to the land since it was conveyed previously to the folks who were in Strudwick's chain of title. Nonetheless, a series of deeds from Strudwick appear to convey much of the land onward to Thompsons, Clendenins, Morrows, Millikans etc.
Posted by Mark Chilton at 7:13 AM No comments:

A recent email to David Southern:

Here are two other maps that show Back Creek and Haw Creek. You have probably seen them both before. One is Jeffreys 1775 map of VA with northern part of NC. The other is a transcipt of some old document probably done by W. D. Bennett. Taken together these two maps and the one you mailed clearly show that Back Creek's old name was Marrowbone River. They also show that Haw Creek was once Buffalo(e) Creek/Branch. 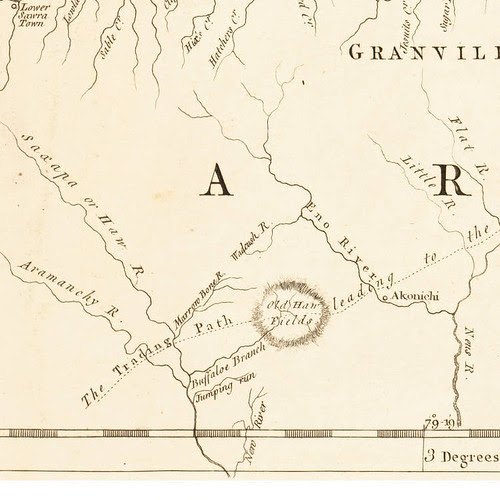 Jeffreys shows Jumping Run right below Haw Creek/Buffalo Branch, but that appears to be an error. It seems likely that Jumping Run is actually the east branch of Haw Creek and some surveyor assumed that it flowed into the Haw River on its own. New River, shown at the bottom of Jeffreys, is of course Cane Creek. But Jeffreys also shows some major errors such as the location of the Haw-Alamance confluence and far worse, he has the Neuse River flowing almost due south from the mouth of the Little River. But Eno, Little and Flat are basically correct. McGowan's Creek is shown as Wadcush River, which is a name I have heard before.

Meanwhile, the 1763 plat shows Island Creek just below Haw/Buffalo Creek. Island Creek appears to be Meadow Creek. Below that is Rockey Run, which from its position on the map would seem to be near Motes Creek. The 1893 Spoon Map of Alamance shows Rocky Run as the first tributary from the east immediately below Motes Creek. On the 1763 plat, Cane Creek is clearly doubly labeled as also being New River.

So, here's the conclusion

I am not sure there is any new information there, but I thought I would write it down so that it could at least be corrected if some of it is wrong. Please let me know if that matches your interpretation.

There are at least two more maps of the area that rea notable. First,

The 1737 Cowley-Moseley map shows Marrowbone River, Buffalo Creek, Jumping Run, New River, Wadcush Creek and Aramanchy River, just about as Jeffreys did 38 years later (no doubt copied). Moseley was one of the original land grantees in the Haw Fields as compensation for his role in surveying the VA/NC border. No wonder then that he shows so much detail in the vicinty of Haw Fields. 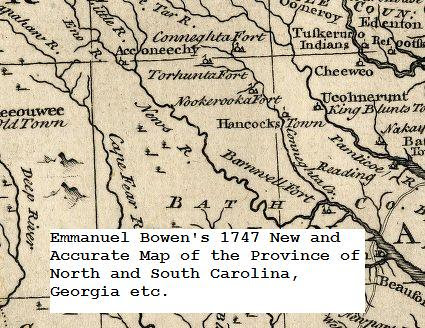 This map does not label the streams near the Haw Fields, but it does show them in quite some detail and almost identically to the Crowley-Moseley map.
Posted by Mark Chilton at 8:00 PM No comments: