Today, the 100% corner in Chapel Hill is the intersection of Franklin Street and Columbia Street - the very heart of the town. But orginally, the center of development was a couple blocks south of there. Let's take a closer look.

Chapel Hill, as you probably already know, was developed by European settlers as a "chapel of ease" on top of a hill. The New Hope Chapel was about where the Carolina Inn stands now. The New Hope Chapel was located at the intersection of two early roads. One road went from Pittsboro to Oxford (essentially what is now US Highway 15) and the other road came west from Raleigh and headed into what is now Carrboro connecting to modern day Old Fayetteville Road/Old NC 86.

The original route of the Pittsboro-Oxford road went through the middle of the UNC campus, travelling right between South Building and Old East. From there it wandered north of Cameron Avenue turning into, approximately, Hooper Lane then Park Place and then following Franklin Street's great curving route down Strowd Hill. To the west, this same road wandered a bit south of West Cameron Ave. and then ran right along Cameron a short ways, bending south along what is now Merritt Mill Road and probably following Smith Level Road out of Orange County.

To piece together what that route looked like, I scaled and superimposed several different maps of the area, including the 1852 Grandy map, the 1792 Daniel map and the 1795 Plan of the Situation of the University. Here's the result: 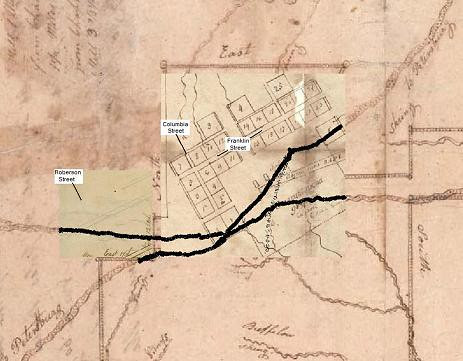 The other road was essentially modern-day Raleigh Road approaching from the east and wandering at an odd angle to Franklin Street etc., more or less becoming Main Street/Weaver Street, N. Greensboro Street in Carrboro.
Posted by Mark Chilton at 4:41 AM