UNC's original property was donated to the University by Chapel Hill area land owners who thought that having a University around here would bring property values up (a point upon which they have been suitably vindicated). One of the original donors was Alexander Piper J-a-m-e-s-P-a-t-t-e-r-s-o-n [Update: Piper, not Patterson], who gave (among other things) a tract of land about a mile west of what became the main campus. [Correction: I do not find any record of Patterson donating land; the Daniel map reads "Donation Patterson." Further Update: I think maybe it says "Donation Piper 20 ac." I think this refers to the deed from Alexander Piper to UNC recorded at ODB 5, pg 614.]

I got to wondering just where the Piper Donation was. I made a bit of a mash up of the 1817 Plan of Chapel Hill, the 1792 Daniel Map of UNC, and the 2009 Orange County GIS tax maps, tying together the dog leg western boundary of the campus, the lots at the corner of Franklin and Columbia Street and the position of the Patterson Donation shown on the Daniel map. The result is very interesting.

The Piper Donation was what would later become Downtown Carrboro: 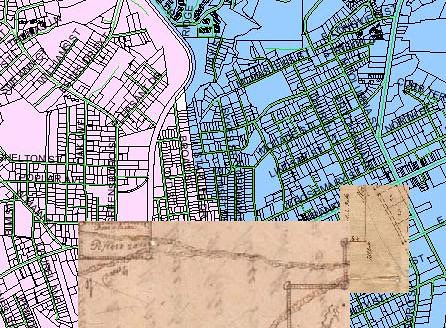 The tract appears to have run from the rail line on the east to Oak Avenue on the west and from Weaver Street south to the south edge of the lots along Main Street. In other words, some pretty nice real estate by modern standards.

Of course, back in 1792, there was not that much there in terms of development. Two roads ran through the property. The north fork was essentially what is now Weaver Street, turning northward and following Main Street, and then Hillsborough Road to Hillsborough. The south fork led to McCauley's Mill, a grist mill that stood about where University Lake dam is now; no modern road really tracks this course.

You will commonly hear it said that Carrboro grew up where it did because that is where the railhead was - that is, the rail lines didn't used to continue south of Main Street. So a railroad station was built and a grist mill and other industries grew up around the railhead. That area came to be called West End (of Chapel Hill) and was eventually incorporated into the Town of Venable, soon renamed Carrboro after the owner of the big hosiery mill.

But it appears that the railhead was probably located in that spot because it was the edge of the Piper Donation. UNC owned the land, and they must have agreed to have the rail line come to that point. Or so it appears.
Posted by Mark Chilton at 7:30 AM